﻿Urban Design and Planning in Copenhagen
﻿

Copenhagen, Denmark
- Explore Scandinavia's Most Innovative City -
Welcome to our site. Find out what makes Copenhagen's urban planning and design so unique. 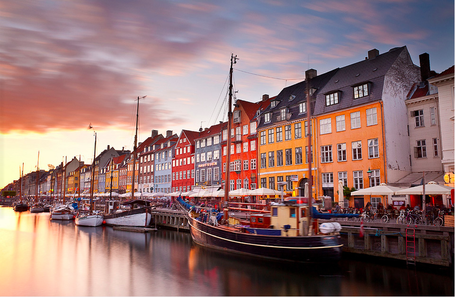 Copenhagen is Denmark’s most populous city and it serves as its national capital. The city approximately has an urban population of 1,246,611 and a metropolitan population of 1,992,114.[1] Native Danish people make up 77% of the population of Copenhagen, Western European immigrants make up 8%, and finally, non-Western European immigrants make up 15% of the population.[1] The city has a large and diverse immigrant population with the most common nation of birth (excluding Denmark) being Pakistan, Turkey, followed by Iraq.[1] The municipality of Copenhagen consists of these ten districts: Indre By, Østerbro, Nørrebro, Vesterbro/Kongens Enghave, Valby, Vanløse, Brønshøj-Husum, Bispebjerg, Amager Øst, and Amager Vest.[1] It is important to note that there is an enclave (separate municipality within a municipality) in the municipality of Copenhagen called Frederiksberg. 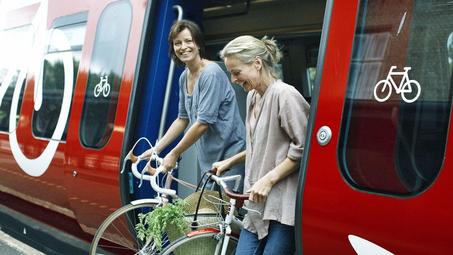 Enjoying Public Infrastrucure
Does a city’s or region’s cultural identity shape its political identity, or vice versa? Either way, it is fair to say that Copenhagen, and Denmark as a whole, is a fairly liberal and progressive place, both politically and socially. Scandinavians are known for their socialist ways and indeed the people of Copenhagen enjoy a socialist welfare system.[2] In Denmark and in Copenhagen, federal and municipal governments play an integral and active part in citizens lives. In Copenhagen, quality healthcare, education, housing, and other social services are subsidized or free. Relative to the United States, the Danish political norm is more trusting and accepting of the role of government. While the United States and Western Europe believe that the role of government is to facilitate and mitigate the externalities of the private sector, Scandinavian political cultural norm calls for a more benevolent role of government. The Danish political norm expects the government to care for its citizens from “cradle to grave”.[2] The Danish people’s trusting and cooperative relationship with the government has allowed for innovative and extensive public infrastructure, especially in their capital: Copenhagen.

Of course, nothing is free and neither is Copenhagen’s extensive public welfare/infrastructure system. The Danish people pay one of the highest percentages of income and other taxes in the world. Indeed, Copenhagen is not a cheap city to neither travel through nor live in.[2] However, residents are able to afford to live in Copenhagen because wages are mostly fair and generous across various industries relative to similar countries. In addition, the excellent public welfare systems like education and healthcare allow households to have more disposable income, contributing to a healthy thriving economy. This socialist system creates a peculiar phenomenon where police officers and teachers can live next to lawyers and doctors, and where one’s profession or wealth doesn't determine social status.[2][3] Instead, Danish people derive pleasure and meaning from life through interpersonal relationships and interaction.

The heavy investment in secondary education on behalf of the Danish government has attracted lucrative economic opportunities. The leading industries in Copenhagen include high-tech and clean energy.[2] In addition to these technical industries, Copenhagen is known for its creativity. Copenhagen has a booming and globally recognized design/architecture/fashion scene, which provide the residents with many creative job opportunities.[3] The merger of high-tech and artistic industries, the well-educated and creative work force, in addition to its geographic advantages (coastal port access), makes Copenhagen a vital economic and cultural hub of Scandinavia. 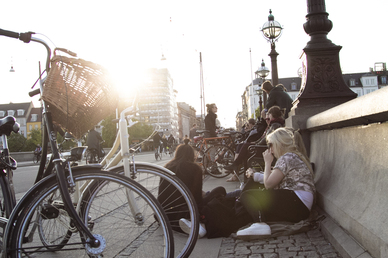 Socializing on the Street
As mentioned earlier, Danish culture places less value in monetary gain but instead, finds value in cultivating and nurturing interpersonal relationships. In other words, Danish people, especially the people of Copenhagen are exceptionally social people. For this reason, Copenhagen has bustling pedestrian interaction during the day. People can be seen hanging out in their public parks/plaza, enjoying a smorrebrod (open sandwich) at their local café, or shopping along the world’s longest pedestrian only street.[4] Copenhagen has a booming nightlife as well. It is home to some of Europe’s most fashionable clubs, bars, and restaurants. Because Denmark has such a relaxed attitude towards drinking, it is common to see residents enjoying a pint of their local micro-brew amongst their friends on the curb or the park bench. If Copenhagen were ever a college student it would say: “work hard party hard, bro.”
Copenhagen not only is an important economic hub of Scandinavia, it along with Stockholm has long served as the center for the art and design scene of the region. Indeed, Copenhagen is full of world-class museums, both classical and contemporary. The Louisiana, which is a contemporary art museum - where the architecture and the landscape design, is just as spectacular as the art displayed there - is just one example of Copenhagen’s rich cultural offerings. Over the years Copenhagen has cultivated a reputation for innovative design.[3] Copenhagen has a booming design scene and culture. Institutions like the Danish Center of Deign  - which showcases both innovative and classic examples in various fields such as furniture design, fashion design, product design, and architecture – highlight the city’s commitment to fostering innovative and creative urban design and architecture.
Copenhagen - Design Innovator
[1] Mouritesen, Lone, and Osborne, Caroline  "Rough Guide to Copenhagen." Rough Guides. Penguin Publishig, n.d. Web. 26 Feb. 2015.