The city of Copenhagen is one of the most sustainable and energy efficient cities in the world. According to its Carbon Neutral by 2025 Plan, it has the ambition of becoming the first carbon neutral capital by 2025.[1] Some initiatives that have helped support this goal include Copenhagen’s environment friendly modes of transport, sensitivity to climate change, sustainable urban redevelopment, and efficient energy use tactics. Throughout its efforts in encouraging a healthy sustainable lifestyle among its people, its planning process plays a more significant role than simply altering people’s values. A 2006 survey found that 54% of Copenhagen cyclists ride because of its convenience, while only 1% ride for environmental reasons. [2] Therefore the sustainable, energy-efficient city did not come only from citizens’ desires to be environmentally conscious. Rather, it is the city’s job to provide accessibility towards sustainable options. Copenhagen’s success is then attributed to how accessible and livable its planned projects are for its everyday citizens. 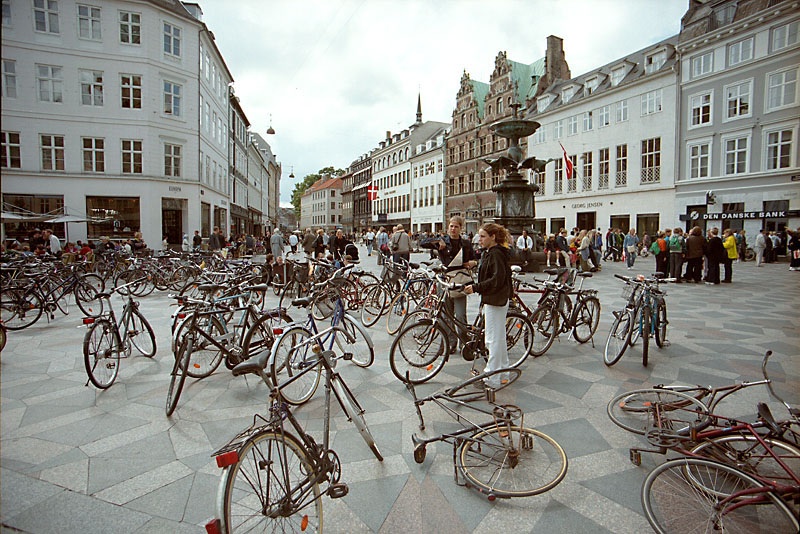 Copenhagen is known for its sustainable bike infrastructure. Instead of heavy automobile use for everyday destinations, well-maintained bike paths allow for smart mobility within the city. Copenhagen has in essence eliminated over a third of all transportation fossil-fuel use and, in the process, eliminated ninety thousand tons of greenhouse gas emissions per year. [2]  This cut down the carbon emissions emitted and provides better air quality for the city. The goal for this year is to meet “4% of the total CO2 Reduction” which is around 20,000 tonnes. [3] Although Copenhageners do utilize cars on the weekends or for long distances, the main mode of transportation is with their bicycles. Copenhagen is also proposing investment into electrical and hydrogen-powered cars. By this year alone, 85% of the municipality’s cars will be electrical or hydrogen powered. [3] This is arguably not only healthy for the environment, but good for businesses as well.

Copenhagen uses an interdisciplinary approach to fund a defense towards climate change. According to its 2011 Climate Adaptation Plan, it is imperative that technological knowledge, combined with proper funding, produces projects that withstand anticipated flooding from the water and sewage system.[4] Several stakeholders in the process include the government, Copenhagen Energy, CPH City and Port Development and the Copenhagen Metro. When it comes to the rising seawater from storms and floods, the city seeks to build high above sea level by investing in dikes, increasing sewer capacity, and more emergency preparedness. [3] The city’s first step in 2011 was to pass on knowledge about climate proofing to the public and businesses. [3] The aim of this initiative was to inform the public about the existing environmental condition, providing options for people to take action in preparing for natural disaster. Another project that, estimated to cost around DKK 50 million, is the opening of piped watercourses. [3] This plan maximizes Copenhagen’s existing watercourse system, ensuring more storm-water is emptied out and preventing floods. Buildings in risk-prone areas are required to be registered and further monitored for any climate change affects.

This year, Copenhagen is proud to announce its first neighborhood redesigned to adapt to climate change: St. Kjeld.[4] The idea is to take the existing streets and raise the sidewalks, leaving the road as a temporary gutter or canal system in the event of flooding. The water is drained from the streets to the harbor. Meanwhile the asphalt previously used for roundabouts, is transformed into a raised sidewalk with a grassy knoll area to the side. This kind of infrastructure change demonstrates an awareness of climate change without the heavy and financially burdensome infrastructure.

The city is also investing efficient energy through district heating and cooling. In this system, heat and chilled water is produced centrally and later carried out towards surrounding neighborhoods. [5] For heat, Copenhagen has innovated Combined Heat and Power (CHP), which captures and re-uses heat energy that is otherwise lost when electricity is generated. For cooling, the district system is still applicable. Copenhagen distributes chilled water, which has been partly cooled with cold seawater. This network distributes energy efficiently and allocates resources in a sharing manner around the city. The integration of fueling this plant with renewable biomass fuels also reduces its carbon footprint. [5]  Copenhagen’s short-term goal is to convert all remaining coal-fired CHP to biomass. The benefits of the CHP system include: creation of jobs, reduced CO2 emissions, district heating costs around 45% less than oil by individual household boilers, affordable energy production without harming environment, and almost no negative impact on air quality. [5]

Copenhagen seeks to reform its current urban structures towards smarter energy use. “Retrofitting” is when old buildings are modernized with energy-efficiency in mind, without taking away the aesthetics of the architecture. Copenhagen is using this technique, planning to decrease 10% of its electricity usage and 20% of its heat consumption by 2025.[6] Renovations include replacing old windows and creating insulated walls, doors, and roofs. In addition to this, green roof gardens and solar cells are added. Advanced technology is also being implemented, where buildings can come equipped with visual monitors of the overall water and energy flow throughout the structure. Advanced heat sensitive technology will be able to indicate how much heat is lost from the building. Today, Denmark has the highest rate in the world of clean energy produced by wind turbines at 22% of its total energy consumption. [6]  These wind turbines are found on farms that are not only owned by the government, but also the community. By opening up this opportunity to the public, local skills are used for upkeep, creating jobs and helping the city progress in sustainability.

In addition to building infrastructure, Copenhagen preserves its green space. It is seen as an efficient way of lowering the city’s surface temperatures and contributes to reducing the urban heat island effect, which is when sun energy is stored within a city’s buildings as heat during the day and released later at night. [3] However, when there is not enough vegetation or water to help this process, the heat is trapped within the city. This makes it difficult for people and animals to retain the ideal body temperature. Thus Copenhagen’s buildings are intertwined with recreation spaces and green parks. In 2014, Copenhagen won the European Green Capital Award, which signifies an outstanding achievement as a sustainable city.[7] In the competition for cities around the world to outshine one another, Copenhagen’s greenness is its leading asset as a city, and has provided a model in administrating this initiative within its municipal and local planning for green space.

The Municipality Behind Sustainability

The sustainability is within Copenhagen’s plans. In 2004, the Park Policy-The Green Copenhagen was published, protecting green areas while new developments arise.[7] This policy remains true today, as 25% of Copenhagen is still covered in greenery among all its new developments. In 2009, the City of Copenhagen proposed an action plan called “Pocket parks, trees and other green areas,” which focuses on the integration of public spaces with urban landscape planning.[7] This redefined its land use patterns. Instead of simply establishing more buildings, Copenhagen is focused more on integrating green measures between, within, around, and surrounding its infrastructure with re-development. In addition to open space, the city can require Sustainable Urban Drainage Systems (SUDS) for all new developments.[4] This requirement embodies a better water system, while keeping overall aesthetics of a neighborhood in mind. Additional building permits are also required to show documentation of its resilience to moisture.

Still, Copenhagen does plan with big new developments in mind. Since the 1990s, planners realized that Copenhagen needed more engaging attractions to keep up as a city and came up with a new master-planned urban district: Orestad.[8] This area is one of the most cutting-edge in aesthetics, transit-oriented development—with its metro accessibility, and water-use technique. Orestad has pioneered in a wastewater system that stores storm water run off from roads, which can later be treated and used by people. [8]  This idea may seem far-fetched, and perhaps even unsanitary to many people. Yet it is an infrastructure initiative that Copenhagen’s Orestad is proud of developing.

Unlike a system based upon consumer demand for energy and supplies, Copenhagen emphasizes supply-side efficiency with its Energy Advisory Service. This organization is a resource for citizens to understand how to use natural gas and limit energy usage. It closely upheld the Brundtland Commission Report in 1987 for sustainability. [9]  Instead of selling people more energy, the service actually taught Copenhageners how to buy as little energy as possible for conservation efforts. [9] Young elementary students are even included in this effort, becoming exposed to an energy-conscious mindset from early on in life. The Energy Advisory Service also provides advice for businesses, that later are able to save money and conserve more energy when in operation.  Copenhagen is more built upon a foundation of providing social services, rather than a framework of consumer-driven demand. Most of its sustainability initiatives come from research presented to the government, which acts upon findings to incorporate the private sector and public.